Exploring the land of Altbier and want the best of breed brewery options? We’ve got you covered with these best breweries in Düsseldorf, Germany.

Let’s get into the top breweries in Düsseldorf, Germany.

Brewery Schumacher was established in 1838 and is located in Oststraße. It is one of Düsseldorf’s independent breweries. It is also one of the oldest breweries in Düsseldorf.

The Schumacher Alt is the oldest Altbier in Düsseldorf and is still being made with the Schumacher family recipe. The malt mixture, rounded aroma, strong foam and rounded bitterness come together nicely to give this beer a classic feel. It has an alcohol content of 4.6% vol. It comes in 1liter bottles, oak barrels and plastic-coated stainless steel barrels of 5, 10, 15, 20, 30 and 50 liters.

The Schumacher Latzenbier is has 5.5% vol. alcohol content. It is stronger than the Schumacher Alt and contains increased original wort as well as malt. The Latzenbier is usually served only on the third Thursday of November, September and March in bottles available in limited numbers.

The Schumacher 1838 is brewed with aroma hops from Canada and Australia. It is a fruity and top-fermented beer with an alcohol content of 5.0% vol.

Since the 175th anniversary of Brewery Schumacher, the Latzenbier has been brewed and sold in 1-liter bottles. 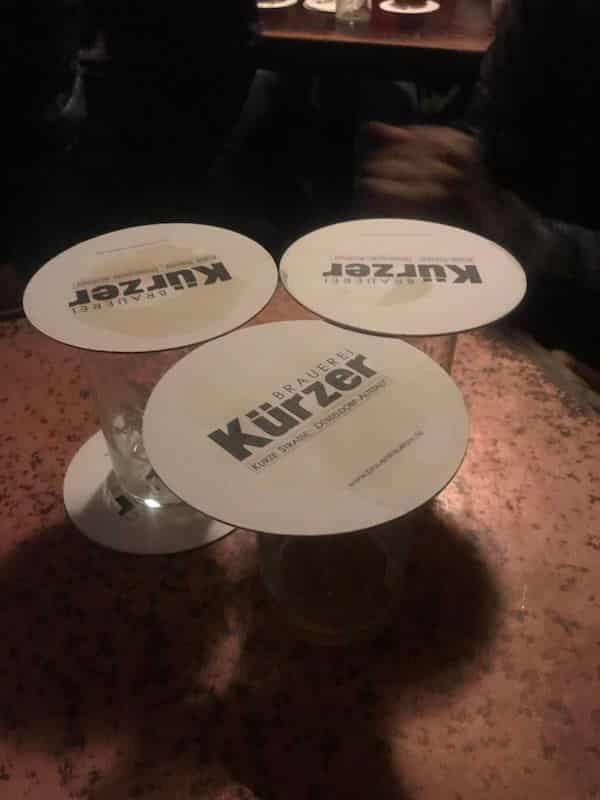 The Kurzer Brewery began operation in 2010. It is owned by Hans-Peter Schwemin and situated on Kurz Strazze in old town Düsseldorf. The brewery produces Kurzer Alt; which is fine-textured, impressively malty, and topped off with a smoothed bitterness to give a full-bodied and flavored beer.

The Kurzer Brewery is known as the youngest brewery in Düsseldorf and it constantly reiterates this fact.

Hans-Peter Schwemin opened the brewery with the intention of adding a modern layer to traditional beer making. This modern layer shows in the décor of the brewery bar as it is decked in exposed brick walls and light wood, giving it a contemporary trendy feel.

The beer in Kurzer is brewed directly on-site, in the rear part of the guest room, right in the pub. This means guests get the opportunity to watch the master brewer do what he does best with the Kurzer beer.

Kurzer Alt beer is available in bottles and can be purchased in Kurzer’s Brewery as well as several stores in Düsseldorf town.

Füchschen Brewery began brewing beer as far back as 1640 in a small alehouse. Then in 1848, the brewery officially became Füchschen Alt Brewery.

The Füchschen brewery is situated in a big old building close to several renowned art galleries in the city of Düsseldorf. Its space is open and huge with dark coloured wooden beams. There are high tables outside the brewery for punters to stand on during good weather.

Füchschen alt beer is malt-filled and light on the palate. It is made with caramel malts and has an aesthetically appealing copper color. Füchschen pilsner is made with flowery aroma hops and bitter malt. It fuses tartness and tenderness into its taste.

Füchschen non-alcoholic is the refreshing brew for those who want the taste of altbier without the alcohol.

The Füchschen Christmas beer is tapped every Christmas eve in a limited quantity and served in a special sommelier beer glass. It is brewed with caramel and dried fruit to give it a rounded bitterness.

This special Christmas beer is stronger than the regular Füchschen alt beer and has an alcohol content of 5.2 vol.

You can also get Füchschen’s 5l disposable party kegs for both Füchschen alt and Füchschen pils as collector items. 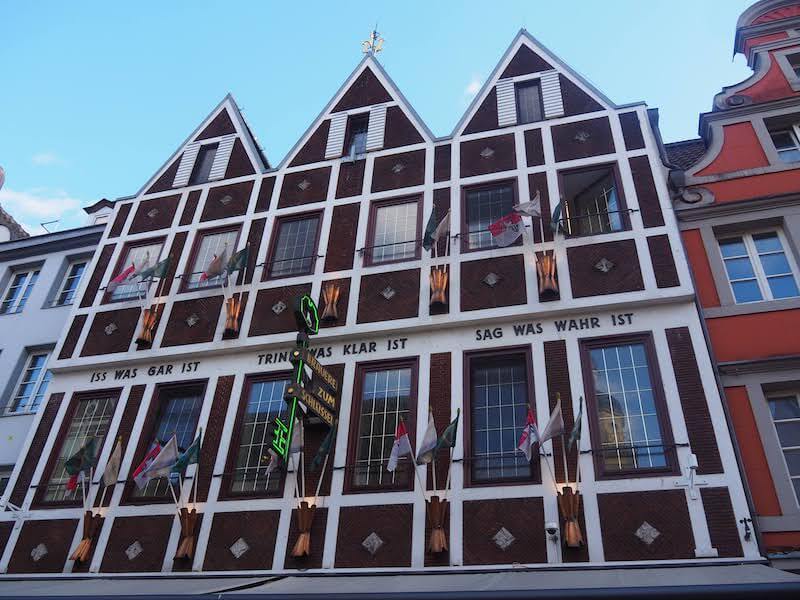 In 1990, after extensive, in depth and extended renovation, the brewery Zum Schlüssel was opened as a venue for people from various walks of life could come together to socialize. It quickly grew in popularity; as the brewery combined old tradition and history with modern standards while maintaining the high standard top-fermented beer brew they were and are still renowned for.

Zum Schlussel Brewery is situated on one of the busiest streets in Alstadt. It is also known as the smallest traditional brewery in old town Düsseldorf.

A particularly enjoyable feature of the Zum Schlussel Brewery is its huge beer garden in the churchyard just across the brewery. The garden is situated right underneath the beautiful Neanderkirche yellow tower. With the ambiance and lovely environmental attraction, it is a nice place to sip and enjoy a Schlusse altbier.

Zum Schlussel Brewery offers the Schlüssel Original Alt and the Stike-Alt beer (which is specially made in the brewery every Monks day).

See Related: Best Things to do in Dortmund, Germany

Since railway operations ceased in 1972, the grounds of the Oberkassel train station has been used for commercial purposes. Presently, the incredible building that was formerly used for the railway station, houses one of the youngest breweries in Düsseldorf.

Alter Banhof Brewery has been in operation since 2011. Its interior is built with mostly wood and copper to provide a sophisticated and aesthetically pleasing décor.

The exterior is also as refined and pleasing to the eyes. When you pay the brewery a visit, you can spot the copper kettles used to brew the altbier directly in the heart of the pub.
Gulasch Alt is the signature beer produced by the Alter Banhof brewery.

It derived its name from the owner’s love of the meal Goulash. Gulasch Alt is known for its rich bursting flavor and excellent taste. It is also impressively amber colored with a nice foamy top to round off its body.

Gulasch Alt beer is brewed with malts aroma, a bit of grass and some caramel, which give it a considerably more bitter taste than a regular altbier.

The drums in the brewery range from 10 liters to 50 liters and you can also pick up a keg to take home.

Since 1862, Uerige Brewery has been making top-fermented beers in Düsseldorf’s old town. This brewery is one of the oldest in Düsseldorf and is known for producing the most bitter of beers in its locale.

The Uerige Alt is made from hops, water, caramel malt, roasted malt and barley malt. It is popular for its distinctive yet enjoyable bitterness, full-bodied taste and aromatic flavor. Uerige brewery also produces a Fassbrause, a Weissbier and two special season stickes as well as its usual alt beer.

Inside the Uerige Pub is traditional décor and paneling made of dark wood. The pub is much bigger than it looks from the outside. It extends down a maze of rooms and essentially takes up the whole block it is situated on.
The Uerige brewery also has a distillery where beer schnapps is produced in a limited number. Beer schnapps is basically beer that has been distilled to a considerably strong alcoholic level.

Uerige brewery calls this beer Stickum. This Uerige beer schnapps tastes like a cognac or malt whisky with notes of the beer. It is available in eight distinct varieties, each one aged in separate barrels for differing years.

However, because of licensing laws, you can only get Stickums on Friday and Saturday in the pub.

Hitchcoq is a well-known restaurant located in Nordstrabe 30, 40477 Düsseldorf Germany. Best known for its tasty, cooked-to-perfection chicken, Hitchcoq boasts of a 5-star reputation in Düsseldorf, Germany.

According to the founders, the inspiration behind the restaurant’s bestselling dish – chicken – was the ‘Nashville style’ of preparing chicken. The chicken is usually pickled for a period of 24 hours after which it is fried carefully. This gives the resultant fried chicken a crunch on the outside and spicy tenderness on the inside.

Hitchcoq, founded by Fabian and Ben, is unique because it doubles as a brewery and a restaurant.

According to one of the founders, their brewery is the smallest in all of Düsseldorf, brewing beer and wine. They make wine from organic plants and contain zero additives. This part of their business has garnered them a lot of goodwill among lovers of beer.

The name ‘Hitchcoq’ was coined from two sources. Hitchcock was a brilliant filmmaker who created movies filled with suspense while ‘coq’ is the French rooster.

With a memorable name, a warm, cozy space, a delightful menu and the best wine and beers offered in all Düsseldorf, Hitchcoq stands as a favorite amongst locals and tourists.

Düsseldorf Germany has many charms and lovely spaces for nourishing locals and visitors. One of the cozy delights is Brauhaus Joh Albrecht.

It is a five-star restaurant and brewery located in Niederkasseler Strasse 104, 40547, Düsseldorf Germany.

Though they make a mean cuisine, they are also known as a brewery that makes tasty beers that are served at just the right temperature.

The brewery offers homemade beers brewed in-house as well as those brewed by a neighboring house, Schmittmann. Schmittmann specializes in schnapps and liqueur.

The menu of the restaurant features delicious homemade meals and although it’s relatively light, everyone can choose something to eat. The space is comfortable and enclosed with an excellent ambiance that creates nostalgia and the feeling of having a large family dinner. There is a garden on the grounds and a wonderful staff. Brauhaus Joh is a great place for both locals and visitors to find respite any time, any day.

There are other branches in different states. You can find one in Hamburg, Konstanz, Soltau and Bielefeld.

What are your favorite breweries in Germany?