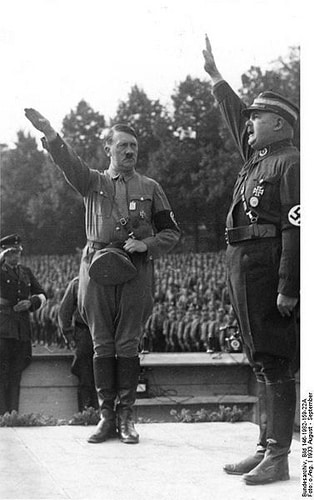 World War II was the most destructive military event in the history of the world. The deaths attributed to this global conflict are estimated at 50 to 70 million lives lost over a six-year period.

It involved almost all of the world’s great nations divided into two major powers, the Allies and the Axis.

By the time the war was over it had involved over 100 million military personnel in a struggle that introduced the world to unheard of numbers of civilian deaths, mass slaughters of enemies and ethnic minorities, and the use of nuclear power to wipe out entire populations.

Germany was one of the major actors in World War II, and its involvement changed the country, and the world, forever.

In order to properly comprehend the level of aggression displayed by Germany in World War II, it is important to understand the impact of the Treaty of Versailles, the final standard of behavior that Germany was forced to agree to at the end of World War I.

The once-great country not only lost millions of lives in the war, but it was also further punished for its actions by being required to take responsibility for having started the war, made subject to enormous cuts on its territory as well as its autonomy, and had to agree to reparations that are still considered excessive.

The German people were mortified and felt emasculated; they were forbidden from having a draft and had their military capabilities severely cut in terms of weapons and manpower.

The dissatisfaction that resulted created a perfect laboratory for the rise of Adolph Hitler and the Nazis, who preached German nationalism and superiority to a populace hungry for a restoration of their pride.

German resentment of their new reality combined with the economic woes of the Great Depression. Hitler and the Nazi party promised the unhappy people a new world order of economic rehabilitation and racial purity and set their sights on the vast lands of Europe and Russia as a broadened territory for a new German empire.

Using a suspicious fire in the German Reichstag (the parliament building) as an excuse, Hitler suspended most basic freedoms for the German people, establishing military rule, outlawing democracy and establishing the National Socialists as the ruling party in 1933.

Individual rights, particularly those of minorities, were cut back dramatically and ethnic intimidation of Jews became legalized and clearly defined by the Nuremberg laws of 1935, which closely defined who was considered to be a Jew, and what kind of interactions Jews were permitted to have with the rest of the German population.

Hitler created one branch of the military, the Einsatzgruppen, or SS, devoted to the annihilation of the Jews, while at the same time pursuing a military expansion. He violated the Treaty of Versailles by reintroducing the draft and by reintroducing production of military equipment to the German economy and began plans for military aggression.

At the same time, Japan began aggression towards China, and Mussolini came to power in Italy. The three powers signed a friendship pact, the Anti-Comintern Pact, that was meant as a denunciation of Communist powers but would later lead to the Tripartite Pact that would identify them as the Axis powers. 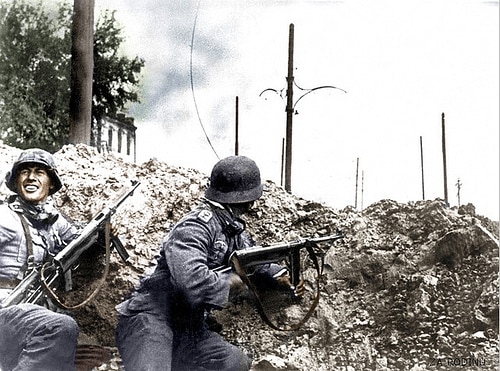 In 1939, Hitler signed a nonaggression pact with the Soviet Union, and immediately thereafter invaded Poland on September 1, 1939.

This was the starting salvo of World War II, and was followed two days later by both France and the United Kingdom declaring war on Germany.

Poland was soon completely overrun by a combination of German and Soviet forces and was split between the two forces. In 1940 German expansion lead to the invasion of Denmark and Norway, followed shortly thereafter by aggression against western Europe.

France was attacked by both the Germans and the Italians and ended up divided and overrun by the Vichy government, who were Nazi collaborators.

As the Soviets became more involved and took over the Baltic states, German-made an attempt at dominating England via an air war that lasted for months and terrorized the country; England managed to prevail.

Throughout, the United States maintained an isolationist position, providing some financial support but largely refraining from military involvement.

In 1941, Hitler changed his focus and began pursuit of the vast lands of the Soviet Union. Having aggressively expanded Germany’s reach into Greece and Yugoslavia, he violated his nonaggression pact, invading the Soviet Union.

The German campaign into the Soviet Union was a long and bloody siege that progressed deep into Soviet territory, but the offensive was stopped in December of 1941. At the same time, Japan attacked British and U.S. holdings in the Pacific, causing the United States to declare war on Japan.

Germany and Italy immediately declared war on the United States.

In 1942, Germany began to suffer air raids from the west by the British that attacked their industrial plants in a sustained campaign over a three year period.

To the east, the battle against the Soviets raged on; the Germans pursued the city of Stalingrad and the Russian oil fields, but the Russians countered with an enormous, winning offensive. The land battle waged on, with power balance shifting back and forth, but the Soviet Union eventually prevailed in 1943 and began pushing the Germans west.

In Italy, Mussolini was deposed and the Italians surrendered to the Allies, but German reinforcements maintained position in Italy and continued to resist.

In 1944, the Allies began an enormous campaign against Germany to retake France. D-Day, as it was known, involved over 150,000 Allied troops. After they retook France, they entered Germany on its western border, while the Soviets entered on the eastern border.

The Germans battled back, but it was the beginning of the end. In 1945 an enormous Soviet offensive regained Poland and forced Axis surrender in Hungary. The allies continued their bombing run on industrial areas. Finally, Berlin was captured in April of 1945. It was the end of the German regime.

Hitler committed suicide and Germany surrendered to the allies in May of 1945. World War II continued through August, when the Americans dropped nuclear bombs on Japanese cities and Japan surrendered.

The Allied victory against Hitler’s military arm resulted in the discovery of the full extent of the work of his other arm, the Einsatzgruppen. As the British and American troops advanced across German territories, they liberated Hitler’s concentration camps and extermination camps. These camps housed the remnants of Germany’s Jewish population, being held in horrific conditions and near death. The concentration camps represented Hitler’s final solution to what he termed the Jewish Problem, as well as his quest for racial purity.

The Einsatzgruppen were responsible for the operation of these camps, which were designed to kill all undesirables in massive numbers, many with the use of gas chambers, the evidence destroyed in enormous ovens. The victims were primarily Jews, but also included Gypsies, political dissidents, homosexuals, and the mentally impaired. In addition to the systematic work done in the death camps, the Einsatzgruppen are also reputed to have killed up to 1,000,000 people outside of the camps through individual and mass shootings.

The discovery of Germany’s crimes led to the Nuremberg Trials, which punished German war criminals, and the end of the war resulted in Germany being split between the western powers of the United States, Great Britain and France, and the eastern power of the Soviet Union.

Today’s Germans look back on the acts of the Nazi regime and the lack of action on the part of the German people as an embarrassment and national shame. German students are taught the errors and evils of the National Socialists so that the same thing can never happen again.