As with so many of Germany’s industries, German beer is produced with the finest in craftsmanship and to the highest standards. In fact, Germans took their beer so seriously that they created the world’s oldest food law, Reinheitsgebot, which decreed that German beer could be made with nothing other than water, hops and malt. Though that law was repealed in 1988, there are other organizations and rules around German beer, all of which are great indicators of just how important beer is to the German culture. 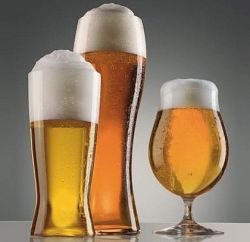 Germans consume more beer per capita than any other country but the Czech Republic and Ireland. The most popular brand of German beer within Germany is Oettinger. There are over 1,300 breweries in Germany and over 5,000 brands. Almost half of all of these breweries are located in Bavaria, which is also home to many Oktoberfest celebrations. Germany is definitely the fatherland of beer-brewing; the oldest existing brewery in the world can be found in Germany; it is a Benedictine Abbey called Weihenstephan that has been in existence since the year 725, and has been brewing beer since 1040.

German beers come in many varieties; these include wheat beers, pale beers, dark beers and unfiltered beers. The advent of dark lager beer was responsible for another law and piece of German beer culture. When the beer was created, it was decreed that it could only be brewed during certain months, and had to be kept in cellars underground. In order to ensure that the beers were kept cold, brewers planted trees to shade the cellars, and ended up putting benches under the trees for their customers to sit and drink the beer. This was the start of the traditional German biergarten, or beer garden, which has been copied all around the world.

Other cultural icons that have been created around German beer include different drinkware such as the beer stein, which is largely ornamental, and the beer boot, which was said to have been created after a German general told his troops that if they were successful in battle he would drink beer from his boot. When they were victorious, he had a glassmaker create a glass boot for him to drink from, and beer boots have been popular among German soldiers and in beer drinking challenges ever since.

Finally, Oktoberfest is a German event that has been popularized around the world. Lasting between 16 and 18 days from late September through early October, Oktoberfest has stringent requirements as to what kinds of beer can be served. There is also a group called the Society against Dishonest Pouring which has existed for centuries and which patrols beer-drinking events like Oktoberfest, to make sure that German beer drinkers are receiving the amount of beer that they have paid for.