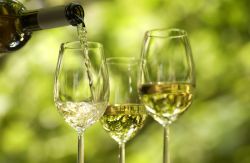 Germany is one of the world’s longest-established wine producing countries. Vineyards have been found in the country’s western region, along the Rhine River, since the days of the Ancient Romans. Today, Germany is number eight among the world’s largest wine-producing nations, creating over 1.2 billion bottles of wine per year.

Germany’s wine-producing history dates back to the Romans, with evidence of grape-growing and cultivating as early as 70 A.D. Moselle was the first established wine region. The popularity of wine paralleled the introduction of Christianity, and Charlemagne was instrumental in importing both to the area.

Most of the vineyards in medieval Germany were run by churches and monasteries, and under the supervision and careful tending of the monks, the quality of the grapes grown flourished. Centuries went by, and vineyards expanded to an area many times larger than what is presently being cultivated, but in the 16th century everything changed. German Beer started being locally brewed, and quickly became the more popular beverage.

Between the damage inflicted by Germany’s thirty year war and the continuing rise of beer’s popularity, the number of vineyards and acres devoted to wine production declined. The end of the German church’s domination of wine production, as well as the intense concentration on quality, came in the 1800s, when Napoleon arrived and distributed their control outside of the church.

Today, two thirds of Germany’s wine production is devoted to white wine; of the 135 grape varietals permitted in the country, 100 are white wine grapes and only 35 produce red wines or roses. Most of Germany’s 252,000 acres of vineyards are located along the Rhine River, which creates a moist microclimate that contributes to German wine’s reputation for acidity. Because Germany is one of the world’s most northern wine-producing regions, they struggle with getting enough ripeness in their grapes to produce red wines.

To counter this problem in both red and white wines, most of their vineyards are planted on steep mountainsides so that they can maximize their exposure to the sun and the soil’s retention of warmth. This makes mechanical grape-picking nearly impossible, so German wine is produced in an extremely labor intensive way. Vineyards tend to be much smaller than in other wine-producing areas of the world.

German wines receive mixed reviews among wine connoisseurs. Most of Germany’s drier white wines stay within the country, while the sweeter, more fruit intense wines that they are known for are exported. Germany’s largest export customer of wine is Great Britain, followed by the United States and the Netherlands. The most popular white wine produced in Germany is Riesling, and the most popular red is a Pinot Noir-type of wine known as Spatburgunder. They also bottle a sparkling wine called Sekt.