If you are taking a trip to Germany, be sure to visit Checkpoint Charlie in Berlin. It is one of the top tourist attractions because it is on of the few lingering symbols of the Cold War. It is thought to be one of the most powerful symbols of the division that existed in Germany as well as the world’s political situation during the second half of the Twentieth Century.

What’s The Back Story? 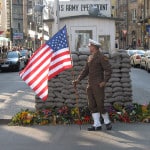 So Checkpoint C is still standing after all these years?

The original Checkpoint Charlie structure was preserved. It can be seen at the Allied Museum which is located in Zehlendorf. The site of Checkpoint Charlie in centrally located in Berlin. In a neighborhood known as Friedrichstadt. It can be found at the intersection of Friedrichstrasse, Zimmerstrasse and Mauerstrasse. The latter was known as “Wall Street” prior to the Cold War.

Germany reunified and the Berlin Wall fell in 1989. At that time, Checkpoint Charlie was removed. For this reason, visitors to the area must content themselves with a replica that has been erected on the spot where the famous checkpoint once stood. Additionally, a line of bricks has been put in place showing where the wall once stood.

Up until the turn of the 21st century, the original Checkpoint C watch tower remained in place nearby. Shortly after the new century was rung in, the watch tower was removed. It’s space is now occupied by office buildings and shops.

Also very near the original site, you will find a museum, Haus am Checkpoint Charlie, which was built just after the Berlin Wall was built. The museum has remained in place and even expanded through the years. It is intended to symbolize a call for freedom.