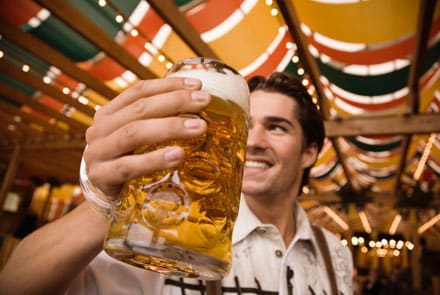 The History of the Oktoberfest

The Oktoberfest isn’t just for Germans anymore. People have flocked to Germany from all parts of the globe to participate in the world’s largest annual festival for nearly 200 years. In addition to the two-week celebration in Munich, the Bavarian capital where the tradition began, Oktoberfest is enjoyed in one form or another in cities and towns worldwide.

Wondering how this great celebration got started? Prince Ludwig of Bavaria, who was later crowned King Ludwig I, wanted his people to share in the celebration of his marriage to Princess Therese of Saxony-Hildburghausen on October 12, 1810. Ludwig organized a horse race and invited all the people of Munich. The royal party drew about 40,000 guests a major rager, by ordinary standards, but only a small fraction of the 6.4 million people at Oktoberfest in 1997. A good time, and copious amounts of beer, were apparently had by all that first year. It was decided that the horse race would be held again in 1811, this time in conjunction with the state agricultural show.

Although the horse race was eventually abandoned, many characteristics of the early Oktoberfest celebrations have been retained, if not expanded upon. Munich’s annual celebration is still held on the original site, Theresienwiese (“Theresa’s fields”), in front of the city gates. The agricultural show continues to be a feature, though it is only held every third year now. The tradition of beer and food stands, begun in 1818, continues today and is perhaps the most significantly developed aspect of Oktoberfest.

16 Days, Millions of People and some Big Tents

The modern celebration has replaced the small tents with giant brewery-sponsored beer halls that can hold up to 5,000 people apiece. The party has also grown in length, to become a 16-day extravaganza ending the first Sunday in October.

The Oktoberfest in Munich has been cancelled at times in the past due to war and cholera. The festival opens with a grand parade of the Oktoberfest “landlords” and breweries, and features traditional dancers and costumed performers, the Riflemen’s Procession, music and, most definitely, beer!