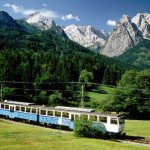 Some of the most popular and beautiful German countryside is located in the deep south of Germany in the Alps. The Zugspite Region is a perfect example. It connects the German and Austrian boarder and includes the highest elevation point in all of Germany.

If you live in Germany along the A3 Autobahn, you’ll often times see Dutch and German cars and caravans loaded with skis headed south to mountainous regions like the Zugspitze Region and other German mountains. Skiing is a very popular sport and past time for many Europeans and most of them head to the Zugspitzplatt which is Germany’s highest ski resort, which is known for having great snow because of it’s high elevation.

If you’ve ever been stationed in Germany, as an American soldier, you’ve surely heard of people going to Garmisch for vacation. The Armed Forces Network, the popular American radio station for soldiers in Europe often times will give out gifts to Garmisch for their prizes.

The Zugspitze Region is a collection of some of the tallest mountains in Germany that over look Garmisch on the German side and The Austrian Cirque on the Austrian side. If you’d like to walk along the tall ridge line and look far out into the distance of both countries you’ll be happy to know you can. Not every mountain range in the world has a walkable path at the top, thankfully this one does.

You could easily be among the 500,000 people who walk that path every year.

At the top of the highest point on the Zugspitze Region sits a 4.88 meter tall golden cross. Made of iron and 14 separate pieces, the cross marks the highest spot in all of Germany. Originally put in place in 1851 by an expedition of twenty eight people, lead by Karl Kiendl. The idea came from a meteorologist and priest, Christoph Ott, who didn’t climb the Zugspitze until 3 years later in 1854.

Severe lighting damage to the original cross had it taken down between the years of 1881-1882 when it was repaired. In August of 1882 it was put back on top of the mountain range, but this time in a different place, on the western ridge where it remained for 111 years. In August of 1993 the cross was taken down again and repaired for damages caused not only from the lightning, but also a low disciplined American soldier who shot at the cross during World War II. Since it could no longer be repaired a replica was formed and put back in it’s original place in 2009 where it now resides.

If you don’t want to ride the 2 hour train trip to Neuschwanstein Castle there’s still plenty to do in the region, including 3 glaciers to observe, cable cars that travel up and down the mountains, hiking, skiing, snowboarding and a lot more.

You can even hike up the entire mountain if you feel like a hike! It generally takes between 1 to 2 days to complete the journey to the top of the summit if you hike it. If you’re physically fit and feel like seeing who can do it faster you could reach the top within a few hours.