Cuckoo clocks mark the hours of the day with the call of the cuckoo. These clocks were first invented in the Black Forest region of Germany in the 18th century. Ever since, these timepieces have been a popular choice for households around the world. 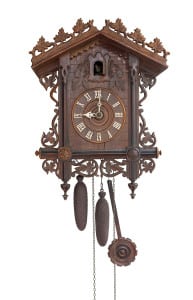 In the middle of the 17th century, people in this region began manufacturing primitive clocks in imitation of those imported from Bohmen, in the modern Czech Republic. While these early clocks were primitive in manufacture, using wooden wheels and stone weights, the technology quickly improved and the clocks became both more accurate and more elaborate.

According to traditional accounts, cuckoo clocks were first invented sometime in the 1730s by a man named Franz Anton Ketterer. He was a clockmaker who resided in the village of Schonwald, near the city of Triberg. Inspired by the organ in the village church, Ketterer used whistles and small bellows to imitate the call of the cuckoo.

This first cuckoo clock was a painted wooden clock with a square face. On top of the face was a semicircle that hid the cuckoo. When the clock struck the hour, a small door opened in the semicircle and Ketterer’s cuckoo came forth to produce its call.

His invention was quite popular, and many other clockmakers in the Black Forest area began imitating it. Many of these cuckoo clocks were much more elaborate than Ketterer’s fairly basic timepiece. Over the next century, the clocks became more lavish and ornate. They also became more accurate as finely-worked metal gears replaced the crude wooden teeth used in earlier models.

Two main types of cuckoo clocks had developed by the middle of the 19th century. Framed clocks had a wooden frame that was painted with a scene from the traditions of the Black Forest. The bird emerged from the upper part of the frame, and was sometimes integrated into the painting.

The railway house clocks were shaped like a triangle on top of a square, resembling the outline of a plain house. Rather than being painted with an elaborate scene, these clocks were instead decorated with flowers or vines. Over time, however, the decorations tended to become more elaborate.

Today, cuckoo clocks are still popular and can be found in homes all over the world. With their attractively decorated wooden frames and cheerful cuckoos, these clocks add a touch of rustic elegance to any household.