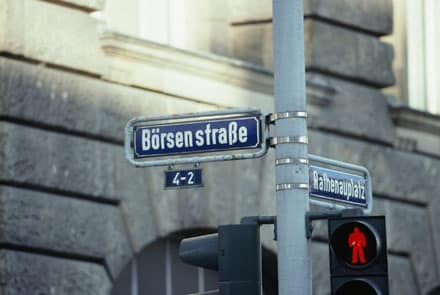 You do not get water for free, you have to pay for it. If you order water you will get carbonated water. In most restaurants you can request tap water and they may or may not charge you but it is most likely straight from the sink.

In some American fast food restaurants, (i.e. McDonalds) you must pay for ketchup as well. Be aware that the menus at most fast food restaurants in Germany are not exactly the same. You may also notice that a sandwich that you recognize from back home may taste a little different or it could be smaller.

When you enter a restaurant you will no be seated, just walk right in and pick the table of your choice!– the tip should be much smaller than you would give in the States (this is because the waiters/waitresses get paid more than in the states) A tip of two or three EUR would be considered a good tip for very good service.

If you shop for groceries in Germany you will notice the supermarkets have all of their large rolling carts outside in a designated area and they are locked to one another. In order to utilize a cart you must place one EUR in the cart itself, you will see the slot on the handle.

Upon leaving the supermarket you latch the cart back to the other carts and pull the device out where you placed the coin, now you can retrieve your coin. When you have all of the groceries you want, proceed to the check-out counter. You will have to purchase plastic bags to put the groceries in or you can take one in yourself.

If you decide to purchase one they are usually visible at the counter and normally only cost a few cents. If there is a long line do not put all of your groceries in the bag, put them back into the cart and bag them away from the line.

On Sunday everything is closed except for some restaurants, bars, gas stations and shops at the main train station and bigger airports. Some bigger stores are realizing that they can make much more money if they open on Sunday so they are doing just that, but I would not rely on it. During the week shops in bigger cities close at 8 PM at the latest. You may see shops in smaller cities closing even earlier.

Public phones are very rare in Germany. If you find one you will notice that they only take telephone cards. You can buy a telephone card in different shops like “T-Punkt”, “Telekom”, “Post”, and “Vodafone” or you can go to an internet cafe.

Flights to Germany may not be as expensive as you think. Cheap flights to Berlin and other major cities can typically be obtained for well under $1,000. I’ve personally purchased tickets to Frankfurt for under $500. However, the time of the year can obviously impact ticket prices and they are always fluctuating and pricing has gone up over the years.