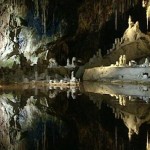 Did you know Germany has over 51 show caves for you to explore? Show caves are determined as any cavity under the earth’s surface that is equipped with lights and can be walked through, and Germany boasts some of the most beautiful show caves in the world.

That’s not just one man’s opinion either. In the Guinness Book of World Records you’ll find the most colorful show cave in the world award goes to the Saalfeld Fairy Grottoes, Feengrotten in German. The fairy grottoes were originally mines and at one time coined the name Jeremia’s Luck. You can take 3 different tours of the Feengrotten in Saalfeld anytime you find yourself in Thuringia looking for an exciting underground adventure. You could even have your wedding at the most beautiful grottoes in the world if you book in advance.

More than half of Germany’s show caves are dripstone caves. A style of cave formation where large stalactites formed from rain water hang from the ceiling.

Germany also boasts Europe’s only fissure cave that’s open to the public. This rare type of cave was discovered when a factory owner was trying to develop his land and stumbled across this rare piece of earth. He fell in love with the cave but died just two years after starting the development. His widow took over and finished the project. Removing over 7,000 square meters of debris and rubble in the process. Named after it’s founder, Rheinhold Goetz, Goetz Cave is now one of Germany’s most impressive show caves.

If you enjoy a good boat ride, check out the Wimsen Cave. It’s Germany’s only cave accessible only by boat. For less than 3 euro a small boat built for 10 will carry passengers into the cave and back out again.

The Schellenburg Ice Cave located in Marktschellenburg of the Berchtesgaden Alps, near the Austrian border of southern Germany and is Germany’s only ice cave. It takes several hours of hiking to reach the cave which is only one of two show caves in Germany to not be electrically lit. Instead the cave is lit by carbide lamps, carried by you, the visitors. The guided tour is about 500 meters and temperatures stay within a few degrees above or below freezing inside the cave.

The Barbarossa Cave is one of Germany’s largest caves with an area of 25,000 square meters to be explored in the east German state of Thuringia. It includes several lakes, grottoes, and large caverns for it’s visitors to enjoy. Gypsum forms on the anhydrite because of moisture in the air and eventually break away, leaving large pieces of gypsum hanging from the ceiling. Truly a site to see.

Another interesting fact about the Barbarossa Cave is it’s link with the Barbarossa Legend. According to the leged, Frederisk Barbarossa sleeps in his underground palace until Germany is unified. His beard growing around a round table. To date his beard has grown around the table twice and when it has grown around the table three times, the end of the world will begin or Barbarossa will come out of his underground palace and rule again. According to legend, until then there will be no other good rulers.